A Brief History of the Gulfport Fire Department

As with any new city, fire protection usually was not much of a concern until the first devastating fire struck someone’s home or business.  In the new Town of Gulfport, this became a big problem relatively quickly.  As the city grew more intensely than most of its time, the city almost immediately determined it was going to require a fire department to be on guard.

In 1902, an ordinance creating a fire department was passed by the Board of Alderman. Within a few years, four independent volunteer fire companies were formed covering each of the rapidly growing wards within the city, which by 1912 had a population of about eight thousand persons. These fire companies included Gulfport Engine Company No. 1, Gulfport Hook and Ladder Company No. 2, George M. Foote Hose Company No. 3, and hose company in the 4th ward made up of African-Americans.

Though the town had been visited by several major fires, it wouldn’t be until the fire of 1906 which devastated another entire block including many of Gulfport’s original building. The fire also wiped out the jail prompting town leaders to search for a new location.

Between 1908 and 1909, many developments in fire protection had occurred. The new central fire station/jail was built, which housed the horse-drawn Seagrave Combination Chemical Engine and the fire hall upstairs. A new fire notification system was installed which would alert fire department personnel to respond to emergencies and included a whistle that could be heard throughout the city.

By 1915, the horse-drawn fire apparatuses were obsolete with the arrival of the first motorized fire engine, a 1914 Boyd Chemical Engine housed in the Central Fire Station located on 24th Avenue.  By this time, several paid firefighters were on call twenty-four hours per day to drive and maintain the engines and fire stations.

With a continually growing population, additional fire stations were added. By 1948, the Gulfport Fire Department was operating out of four fire stations. Each of these stations operated with paid men and a volunteer auxiliary force throughout World War II.

In 1950’s, the fire department experienced real growth with the addition of more modern equipment. Mack fire trucks began to change the landscape of the department. By 1970, the entire fleet was equipped with modern Mack firefighting apparatuses.

Between the 1960’s and 1970’s the city nearly doubled in size resulting in additional paid firefighters. By 1975 the department had nearly ninety firefighters protecting the city with 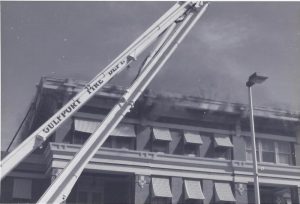 seven fire station in place.  In 1968, the City received a Mack CF600 85 foot snorkel truck which was equipped with a pump and was one of the first of its kind in Mississippi.

In October of 1953, Ordinance Number 864 was passed establishing a Fire Prevention Bureau. The addition of this division ensured obligations of the fire department were being met, such as buildings were built to current fire codes, providing public fire education programs and fire causes were being investigated to prevent further occurrences. The Fire Prevention Bureau would see growth by the 1970’s adding a Deputy Fire Marshal and several fire inspectors and investigators. In 1977 the fire department vacated the old fire house and moved into the new half-million-dollar central fire station.

With the advent of Mobile Emergency Medicine programs, the Gulfport Fire Department, in the late 1970’s, began training Emergency Medical Technicians and Paramedics. These responders would provide critical lifesaving services to the city’s residents and visitors.  This ever-important program continues today and makes a big difference in the cities healthcare system.

In December of 1993, Gulfport annexed thirty-three square miles to the north of the city limits, making it the second largest 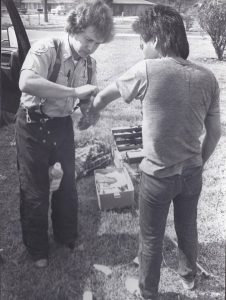 city in the state. Of course, this required building a larger fire department. Shortly thereafter, five new fire stations were built serving the newest portions of the city.

Today, the Gulfport Fire Department operates from eleven fire stations throughout the city. The fleet consists of ten engines, three ladder trucks, one hazardous materials response unit, and thirty foot fireboat which are staffed by one hundred and sixty-five firefighters.  Over the last one hundred and thirteen years, the Gulfport Fire Department has embraced modern firefighting trends and practices and will continue to save lives and property just as they have since the days of the horse-drawn fire wagons of old Gulfport.